GEARING UP FOR A DEER HUNT THE RIGHT WAY

When you’re getting ready to start the deer hunting season, you may need a few tips regarding which equipment to pick up and which equipment to leave at home. We’ll clue you in about everything you need for a good hunt so that you’ll be ready to go on the first legal hunting day.

What are the Essentials for a Deer Hunting Excursion?

Many people like to make deer hunting complicated, but in truth, there aren’t very many things that are absolutely necessary to get hunting deer.

The bare minimum set of equipment to go deer hunting is:

This kit is very basic, and it’s only going to get you through an afternoon or a morning of hunting before you’ll start to feel uncomfortable. Notably, if you roll out into the woods with only this set of equipment and nothing else, you’ll only be suited for a relatively mobile hunt.

And as we all know, mobile hunts tend to be unsuccessful hunts. Deer can hear you clomping around from a mile away, and the trail that your scent leaves behind will make it easy for them to dodge you when you’re on your way back to the truck.

What Weapon Is Right for Me?

Aside from your safety clothing in bright hunter orange, the most important piece of gear in this basic kit is your weapon.

You have a few choices for hunting deer. The choice that most hunters opt for is a deer rifle. Crossbows and compound bows are acceptable alternatives, but only if you know how to use them effectively.

You will probably want to stick to a bolt-action deer rifle that can mount an optic. Weight probably shouldn’t be a consideration when picking a deer rifle — most deer rifles will weigh around ten pounds, which is fine because it minimizes the sway when you are set up in a blind.

Don’t put too much thought into your rifle selection once you have satisfied these basic criteria. So long as it can put a bullet where you are aiming and kill the deer in one shot, you are good to go. You may also want to ensure that your rifle has a sling to make it easier to transport.

Make sure that your weapon is legal in the state that you plan to be hunting in. Always use the proper ammunition for your rifle — and it might be a good idea to read ammo reviews online if you’re about to try out a new brand. You won’t be shooting many bullets out of your rifle, so you want the best ones that you can purchase.

Furthermore, after shooting, be sure to give your rifle a cleaning, especially if you were out in a dusty or wet area. If you keep your rifle clean, it’ll stay in good shape for many years.

The second most important piece of gear in the kit is the knife. Your knife is what you’re going to use when you need to skin the deer and do some basic butchery. It’s also your go-to tool while on a hunt, so it behooves you to pick a good one.

A great camp knife will last you for many years, so put some effort into making the choice. For deer hunters, you’ll want a knife with:

Keep your knife handy on your belt or in your pocket — it’s also very useful for cutting away shrubbery or small branches if you want to add a bit of camouflage to your blind or your jacket.

Additional Items to Consider Taking Along

Most hunters prefer to make their deer hunt a bit more comfortable and also a bit more complicated than the bare basics. You’ll typically want to carry and wear:

Once you have these items in your pack, you’ll be ready for a real deer hunting session. The point of these add-ons is that they make you a lot more comfortable and also a lot more effective at hunting deer.

Of these items, the most important ones are the guidebook and the binoculars. Your guidebook will give you clues about where to find local wildlife that will be of interest to deer such as edible shrubs. It will also instruct you regarding their most likely habitats.

The binoculars will also help you to find the deer directly once you’re in the right area. When picking out binoculars, remember that magnification is not everything. The more magnification you have, the narrower and darker your vision will be.

Your boots are also one of the more important pieces of gear that you’ll be bringing with you while deer hunting. Your boots protect your feet from the forest floor, rocks, spent shell casings, and practically everything else.

They’re also going to be the main thing keeping your feet warm on a cold day. On the other hand, your boots that you bring deer hunting are probably going to take a little bit of abuse. Bringing designer boots on a deer hunt is a misuse of your resources.

If you plan on staying put, however, you can opt for a more comfortable and more lightweight boot. In this situation, the warmth of the boot is more important than the tread or the build.

Lined boots are often a bad idea for hiking because they can make it harder to wear layers of socks, and they can become soaked, but if you’re staying put, lined boots are highly effective.

You shouldn’t worry very much about the camouflage or the look of your boots — focus on finding the boots that will keep you comfortable in your intended hunting situation.

A Note On Camo

Camouflage is also something that most deer hunters prefer to have. Remember, camouflage is only useful if it matches the terrain that you are hunting in! There’s no point in bringing camouflage that is the wrong pattern for the season or the environment.

If you can’t find a matching camouflage for your environment, going drab is a good bet. Olive or brown mottled colors are more difficult for deer to spot. If you are planning on using a blind of some sort, you can often get around weak or incorrect camouflage with some on-site ingenuity.

While it isn’t on the list, some hunters like to bring webbing which they can use to decorate their blind or themselves with local pieces of foliage. This is likely the superior camouflage, but it’s a bit overkill for most hunts.

Bringing beers or whiskey is a staple of the deer hunting experience, but remember to keep your drinking moderate. There’s nothing more frightening than a drunk hunter.

Likewise, if you plan on bringing a complicated blind, remember that you’ll need to break it down after the hunt is over unless you plan on returning soon after.

What if I Have Extra Room?

Aside from the things you need to bring and the stuff you probably want to bring, many hunters like to introduce a bit of luxury into their deer hunt.

Of these items, the tower box blind is the biggest single luxury item. A tower box blind can take a few hours to set up, but the result at the end is amazing: you have your own elevated shooting position which is often camouflaged.

With a tower box blind, you can get the height-based visibility that you need along with the protection from the elements that you want and the ability to stay invisible to deer. This makes for a comfortable and also effective hunting experience.

This means that you should go big or go home when you’re picking a tower box blind. Don’t feel constrained — the more comfortable and effective your tower box blind is, the more relaxing it will be to settle into after you build it in the field.

Aside from the tower box blind, the other items on the list are more minor quality of life improvements. If you’re working on your marksmanship, a bipod or rangefinder might be nice — but neither are necessary, and both can be an extra thing that you need to carry.

What Don’t I Need for Deer Hunting?

Many people are tempted to bring all manner of things with them while they are deer hunting that they do not need. These items weigh you down and make you look ridiculous. Try to avoid bringing:

There’s a reason why you should avoid these items. As you may have noticed, many of these items-to-avoid are regarding your hunting weapon or gear. The point of going deer hunting is not to show off all of your “tacticool” equipment. Leave that stuff at home — it’s heavy and makes you look silly.

There’s no need to bring a sidearm or a weapon that is not optimized for deer hunting. Leave your AR-15 at home — it isn’t the right tool for the job. Your deer rifle needs to be both accurate and have a high enough caliber to ensure a one-shot kill, and most civilian firearms simply do not cut the mustard.

Likewise, you do not need to bring too many bullets. You shouldn’t be shooting that much — after all, you’re not plinking on the range. Bullets are also very heavy, so it’s better to pack light. If you need to carry more than 15 bullets on your person, you need to hit the range and work on your shooting.

The other trick is that you shouldn’t be bringing anything smelly. This means that hot food, deodorant, and hot drinks need to stay home or sealed up tightly. The deer can smell this stuff from a mile away, and you’ll never catch sight of them if they do.

You also don’t need to bring a hatchet or advanced fire-starting equipment with you on your hunts. You can keep a few easy-light coals if you want — but lighter fluid is smelly, heavy, dangerous, and simply not necessary.

You probably also don’t need a hatchet or anything to chop wood — if you start a fire, you’re not going to be sitting on it all day. 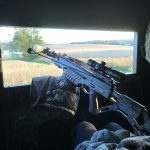 6 THINGS TO AVOID IN YOUR DEER HUNTING BLIND